Fruit of the Loom® History

The first printed label ever used on a bolt of cotton cloth was originated by the daughter of Rufas Skeel, a merchant, and applied by her to muslins supplied to her father’s store by B.B. & R. Knight, Inc., Providence, R.I., a textile mill established in 1851, by two brothers Benjamin and Robert Knight.

To attract customers to some muslins she particularly admired, the young artist painted pictures of the swar apple, a favorite in her family, and pasted them on the cloth. Just as she hoped, the muslins to which the paintings were attached were the first to sell. More and more paintings were demanded, and Miss Skeel added to her original apple other fruits such as Ne Plus Ultra grapes, the Non Such pear, Non Pareil cherries and Seek No Further apple.

Robert Knight was very impressed with Miss Skeel’s pictures, which were copied and appeared as printed labels with the famous Fruit of the Loom name on cloths which came from the Knight mills in 1871. In 1875, a combination of three fruits was adopted for the label; the peach, the pear, and cluster of grapes and in 1883, for the participation of the label at the Chicago World’s Fair a new assortment was prepared; the apple and grapes and gooseberries which appear today.

The artistry and imagination of the young woman who thus initiated a label which stands today as one of the most brilliant ever achieved in consumer goods had a worthy application. For the concept of high quality rigidly maintained, which Robert Knight had in the production of the cloths so marked, was equally unusual for the times and, of course, equally important in establishing the value of the trademark. To him the label originated by the talented artist represented the perfect counterpart to his trade name, Fruit of the Loom, which he had adopted in 1856, and had registered with the United States Patent Office in August 8, 1871, just one year after the passing of the first trademark law by Congress. It’s interesting to note that Fruit of the Loom holds the low Patent number of 418.

Today, well-over 100 years after their birth, Fruit of the Loom products still maintain the same high standard of quality today. That’s why people all over the world recognize and buy with confidence products that bear the famous Fruit of the Loom label. 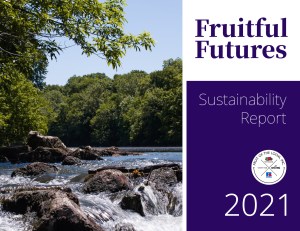 Our 2021 Sustainability Report is now available!